One of many possible naktivities:
Jog in the nude, run in the buff!

Translation of coinages is hard to do, because you have to get the idea in the other language and try to find something appropiate in English. The German noun “Nacktivität” is a coinage of “nackt” [en: naked, nude etc.] and “Aktivität” [en: activity].

Our first try was “nacktivity”, intentionally chosen with the “c” and the “k” to build a coinage out of “activity" and “naked". A comment by a professional Dutch translator licensed to certified translations to English was, that this does not sound English. Her suggestion was “nudevent” as a coinage out of “nude” and “event”.

We used it from April 2017 to October 2020 for the natury website, although native speaker John, Ireland, commented, that “nudevent” does not sound English.

A talk in 2020 with a native speaker, who was raised in England and speaks several languages including German on native speaker level, helped again to ground an impression. He commented:
“I like the coinage 'naktivity' without the 'c' and I like the alliteration 'biking in the buff'.”

Due to a necessary translation because of a completely redesigned “Das nackte Leben” | “Nude life” menu part of the natury website, we now use “naktivity" instead of “nudevent” and “biking in the buff” instead of “biking in the nude”, which was chosen before to distinguish the wording from “hiking in the buff”. To cite Rich again: “I think there's a hundred and one ways to mix these related words together. Whatever works is ok!”

Some native English speakers might prefer the coinage “nudevent” and do not judge the coinage “na(c)ktivity” as elegant English, others just vice versa, while others have accepted all of them as understandable.

An open question is, if the use of such coinages helps to attract more attention or if it confuses more than it helps – even at the beginning, when they are new. Another open question is, if these coinages should be explained or simply used without any explanation at all like in advertising, to display a textual eyecatcher. Right here, we offer explanations. If you understand and like a coinage new to you from the beginning without any explanation, that's fine. If you want to read the explanation, go ahead.

So, it is upon you – dear reader – to answer these questions on your own, to discuss them with others, and to choose your preferred ones for your personal communication. Let's see, which one will spread out and flourish most!

Example: Have a look at the social career of the coinage “nakation” in Internet.

Google was ranking the natury website in English on top postions:

A search by Google on 12 March 2020 in Germany and on 18 March in USA showed articles of the natury website concerning the terms “nudevent” and “nudevents” on top postions. On 18 March, a search for “nudevents” from Germany showed, that the second entry, which was “Hiking in the buff - Natury” on 12 March, had been replaced by “Nude biking - Natury”. Good news is to see the natury website a couple of days later again on position 1 and 2.

The US ranking order differed slightly from the result in Germany, but was also very good. 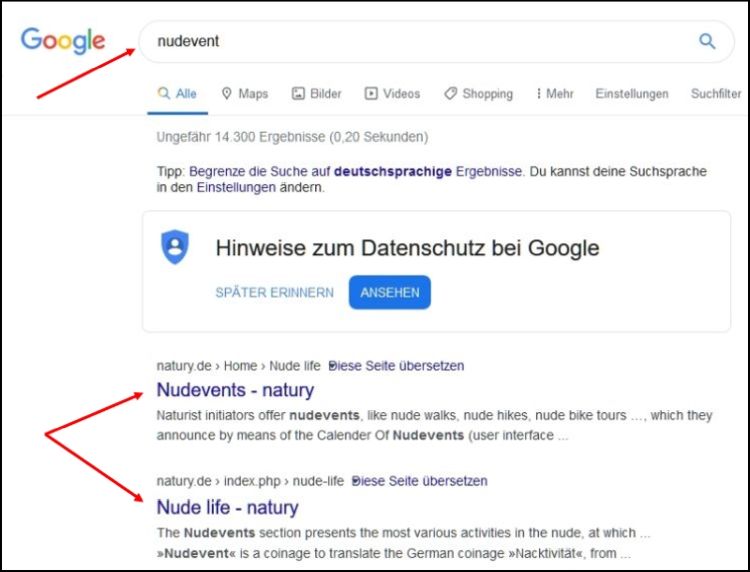 Search from Germany for: “nudevent”

Search from Germany for: “nudevents”

Search from the USA for: “nudevent”