Nudity and sex are two completely different aspects of life, that have nothing to do with each other. How many times a day do you get nude, but you don't think in the least of sex? Nevertheless, there are still people, who always equate nudity with sex – but that is such a limited view, as if you would recognise only Venus amongst all the points of light in the night sky.

The fact, that sex has something to do with reproduction, is a relatively recent finding in the history of humanity. In the first almost 30,000 years, which are documented by human cultural testimonies (from about 40,000 BC), female fertility symbols dominated the art world, and this undoubtedly reflects the conviction, that femininity was responsible for the survival of society and that female idols and deities should therefore be worshipped. 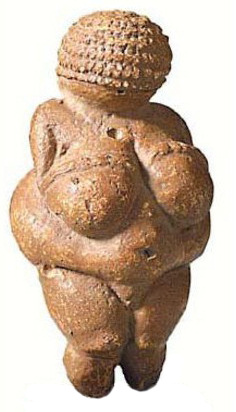 In the secular area, predominantly matriarchal structures were established according to this. One of the last historically documented states of this kind is the Minoan Empire on Crete, which perished around 1400 BC due to a tsunami disaster. Until then, however, a matriarchal power structure had been in place, which had guaranteed for centuries, that the daily life of the Cretan people was conflict-free and their provisioning assured.

It was not until about 10,000 years ago, that the world came to realise beginning in India, that the fertility of women would be useless without male sperm. As a result of this knowledge, the phallus became the new fertility symbol, which gradually replaced the traditional female fertility symbols such as breasts, vulva and lush hips, and in many places a distinct phallus cult developed, which rites have been handed down from Greece and Egypt.

Woman carries a wooden giant phallus at the festival in honour of the god Dyonysos (Greek vase painting approx. 300 BC)

In parts of Japan such fertility festivals are still celebrated today. These include, for example, the festivities at the Kanayama Shrine in Kawasaki or also Hōnen Matsuri at the Tagata Shrine.

Of course, even without the knowledge, that the male sperm is the trigger for the conception of a woman, the sex drive has fulfilled its task at all times - for humans as well as for all other living beings, because otherwise they would long since have died out. But the knowledge about the sexual interaction of the genders and the conception-triggering effect of sperm has lastingly changed the way of thinking in the world within the last 10,000 years.

For our current practice of a culture of living nude, this history of humans has an important consequence: As naturists, we want to contribute, to reduce the overemphasis of the phallus and the dominance of masculinity, which burdens human development since about 10,000 years, to the equally important and equally justified position alongside the female conception. The equal rights of women and men, first fixed in the UN Charter of Human Rights in 1948, are still waiting to be put into practice in everyday life worldwide, even in Germany.

This applies, however, especially to many cultures that are strongly influenced by a religion in which "the woman is taught to be subject to the man". Many of today's states not only allow women to be worse off than men, but often deprive women of even the most basic human rights, such as self-determination. That is simply criminal.

We naturists know that women and men are equally important and equally entitled before God, Allah, Yahweh and – only relevant: the human conscience and: in the face of our children! It is important to us naturists to understand and represent the necessary, complementary completion of the genders, and thus to achieve their equal coexistence and togetherness everywhere in the world, above all against the obviously criminal abuse of power in various patriarchal – no: patri-archaic – shaped world views.

Wherever this succeeds, it could also again lead to a stronger influence of matriarchal ways of thinking, which previously made lasting peace possible over thousands of years, and which today could perhaps still stop the downfall of mankind - as well as our animal world! The stronger consideration of femininity is seen by many thinkers of our time as the only way out of the present, for 10,000 years dominating, male violence, which is acutely about to precipitate mankind and all life on earth into the abyss.