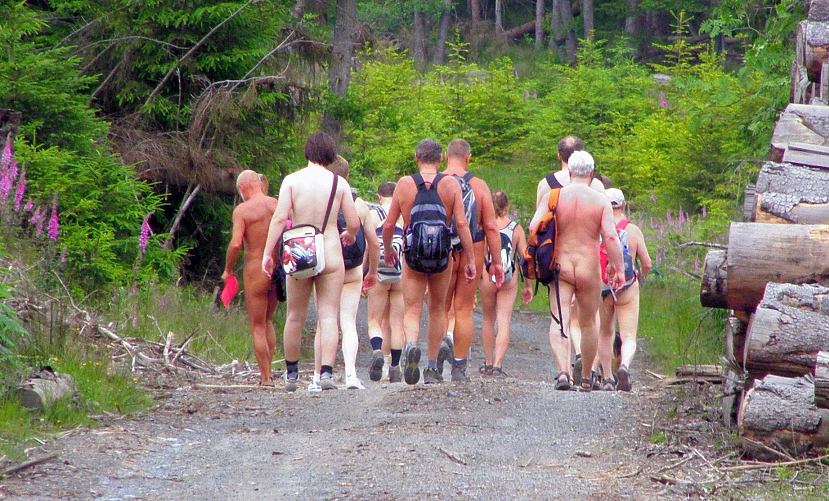 Philip, a journalist of the German daily newspaper FAZ (Frankfurter Allgemeine Zeitung), was one of us and accompanied us during an 18 km long hike on 22 June 2008 in the Arnsberger Wald Forest Nature Park. His report in a the Frankfurter Allgemeine Sonntagszeitung (issue of the same German newspaper on sundays) revealed, that he felt as an absolute novice among us nude hikers in about the same way as a smoker at a non-smoking party. However, he did not show anything about his feelings during the hike!

If people were meant to be nude,
they would have been born this way.

Hiking in the buff is the pursuit of hiking in unclothed condition. At the most, you wear socks and hiking boots, to keep your feet free of pain and injury on stony paths. Keys, handkerchiefs and other items needed on the way, are conveniently stored in a small arm or belt pocket. For long hikes, you needs a backpack with a drink and provisions. A towel might be useful to sit on during a rest.

Why is nude hiking so beautiful?

German knowledge magazine P.M. informed in the April 2009 issue all those, who don't yet know, “Why is hiking in the buff so beautiful?” P.M. knows the answer: “The particular feeling of body and nature, intensified by nudity, and the resulting feeling of freedom … cannot be explained, but has to be experienced by yourself.”

So: Just have a try and
sign up for your first nude hike!

Clothes make the man.
Without clothes, we are human beings.

We also care to cooperate with the responsible authorities and inform them in advance about our planned activities.

Thus, the local police receives in advance the information about planned nude hikes, because often calls from uninformed citizens first arrive at the police. The trigger for such information in advance is the request of the police colleagues from Middle Hesse, Germany, to inform the local police about our hikes in advance. The Hessian colleagues were called out in April 2010 during our hike in the Taunus Mountains to an unnecessary police operaation, which led to a 60 kilometer long police operation, only because a caller did not know naturist hikes and could not know classify them correctly. After the policemen had accompanied us for a while, they said goodbye and wished us “even more a nice hike”.

Through this preliminary information, we hope, that in the future such unnecessary police operations will be avoided and possible callers can be calmed down or informed that with the nude hikers all is in good order order and they do nothing wrong.

This advance information saves costs, but the decisive factor is that the action forces can concentrate on more important things instead of having to control harmless nude hikers!

On my registration of the hike in Teutoburger Wald Mountains on 1 October 2011, responsible police reacted by a telephone inquiry:

“This is probably the first nude hike in our region. However, hiking in the buff is becoming more and more frequent in Germany. From which parking lot do you start? On which ways do you want to hike? How many participants does your group have?” … After all the questions were answered as well as possible, the policeman on phone concluded: “We wish you a joyful and undisturbed hike and as few calls as possible from irritated textile hikers.”

The wish of the policemen came true: Textiled hikers, who met us, spoke directly to us and asked us about our motivation, or they greeted us with friendly, humorous remarks. There was not a single call to the police all day. Meanwhile, nude hiking has just become normal in Germany. Two examples: