At an official nude bathing beach 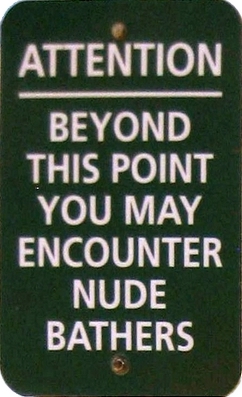 So what?
Under our clothes we are all nude.

Many stretches of beach, lakes or rivers are declared official nude bathing areas and are sometimes marked with appropriate signs. Here we find nude bathers and those with seamless tans:

The only ones, who may have a personal problem with nudity, are a few non-naturists, who prefer to stay dressed.

There are true paradises for naturists around the Mediterranean like this one here on Corsica. 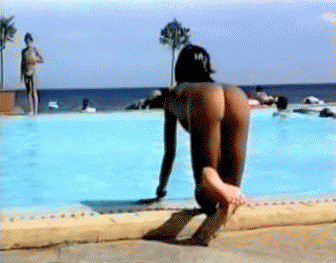 Bathing fun - a scene from the video »Oliver«

There is nude bathing at many places that have not been officially declared as naturist areas. This can develop as a common practice over the years and may help to establish the area as “official”.

Where it is not common yet, two are usually enough to get you started to find imitators who will join you. Being nude can be contagious! And, on a hitherto textile only lake, a small "textile-free zone" can be been created. It is more difficult to start as an individual person whose action can be misunderstood.

An example of peaceful coexistence of textile and nude bathers is the Silbersee [en: Silver lake] near the city of Haltern, Westphalia, Germany. On the west bank bathers with swimsuits assemble, on the northern shore we find the nude ones. In between, a transitional zone develops naturally and is used equally by both groups. We can even find families, where father and daughters are nude, and mother and sons have swimsuits - or vice versa.

Such »clothing optional« zones are the best and most natural, as anyone can walk around nude or dressed, as they prefer. That is real freedom!

Everyone according to their own preference 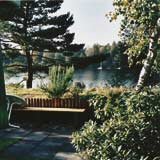 which are associated with the Deutscher Verband für Freikörperkultur (DFK) [en: German Association for Naturism] which is organised at state level, and is in turn associated with other national associations in the International Naturist Federation (INF / FNI).

In the associations, people come together who have a common attitude to the life and practice of naturism.

Many naturist clubs have their own grounds with swimming pool, games, sports and sanitary facilities, and sometimes even a clubhouse. The upkeep of these facilities is covered by membership fees and daily attendance fees that non-residents must pay to use the club facilities. In some clubs, only members of another club or the DFK / INF are accepted. Others welcome guests who are not members of clubs or the DFK.

Of course, club life is quite varied – depending on the size and facilities of each club. Many clubs also provide information on their club websites – which can be found via the DFK site.

Many naturist clubs are suffering from lack of young people wishing to become members. There are many reasons. Club fatigue has become widespread, especially for naturist clubs. It is a fact that there are now many more opportunities to be nude in nature without having to be a member of a club. We now have spas, sauna parks and swimming pools that welcome naturists. Also there are now many official and unofficial naturist areas at lakes, rivers, parks and campsites. And, of course, there are naturist holiday destinations in Germany and abroad.

There are few swimming pools where bathing suits can optionally be worn or simply omitted. One that does is the Hamburg-based swimming bath Volkspark, which is open to the public during the day and is run by a naturist association. Most other baths do not allow "clothing optional" – why not? If everyone has the freedom to decide what to do, then everyone should be satisfied.

Instead, the baths have pool-wide nudity on occasional "Paradise Evenings" and prohibit the wearing of bathing suits. Such nudity is respected, but is often accompanied by an obligation to wear bathrobes, etc. in the restaurant and rest areas, which some may view as inconsistent.

This is different from the natural way of walking around nude as on the summer lake. The ideal of these "Paradise Evenings" has not yet been achieved. Often I am the only one who remains nude, and am sometimes viewed with suspicion about my motive.

Why do I have to carry a towel around my middle when I am sitting at the table and eating my sausage? But why am I allowed to be nude if I sit on a bench 5 meters outside the restaurant zone and bite into an apple?

Why can I stand nude in line at the kiosk in the Strandbad Unterbacher See [en: Beach Unterbach Lake] for coke and fries, and sit down nude with other nudes at a table to consume both? But on "Paradise Evenings" at the pool I cannot. Such inconsistent rules are hard to understand.

The saddest thing is: why does nude bathing in the baths usually start at 7 or 8 pm, often even at 9 or 10 pm? This is too late for our children for whom nude bathing times should be available during the day!

After all, you can explain at least to children, that they should wear clothes when bathing, even when they say they prefer being nude. They would like best to romp around nude in the whole baths, and not only in the baths, but also on the playground, the sandbox, or the fountain in the pedestrian zone. And naturists would say – why not let them do it?

Of course, if there is no diving tower, we are happy to have any alternative jumping aid – even some friendly assistance!

Special nude swimming events are announced in the

There is also a registration option linked to the events.

Also, there is an overview by country about beaches, where you can be in the buff, on wikivoyage.org (new tab or window). Perhaps also helpful to plan your next nakation …